I'm just here so I won't get fined.

Eternal Night of the Living Dead

If you’ll induldge me, reader, this post starts off with an exercise. Fire up your preferred search engine and search for the phrase “git branching model” (with or without the quotes). It’ll be a cold day in hell when “A successful Git branching model” isn’t the top result.1

GitHub Flow was written three years later, largely as a response, from one of the devs that helped make git the ubiquitous software it is today. Another year after that, another hosted-git startup founder took another shot in Gitlab Flow.

Despite that, Git Flow refuses to die. Now over ten years after it was first published, any discussion of git branching strategies for groups of developers in mainstream forums still starts with Git Flow as the assumed default.

Git Flow introduces a ton of unnecessary complexity and version control overhead and is suboptimal even for its creator’s contrived2 use-case. A short list of problems, written about more eloquently and in more detail elsewhere:

The gist is that you can still collapse the complexity of git flow and maintain multiple versions of software, all by understanding how to tag and branch in git efficiently. The end result of using git flow is adding to the complexity new developers need to wade through when you onboard them, and this is one area in particular where eliminating unnecessary complexity pays dividends.

You can read about it here.

I started marking up Driessen’s illustration demonstrating a Git Flow graph, but that got way too busy way too fast.3 So here’s a brand new illustration demonstrating a graph of trunk-based commits on a hypothetical project where multiple major releases are supported concurrently. It includes over twice the number of releases as the original drawing, with the same number of total branches and half the number of permanent branches. 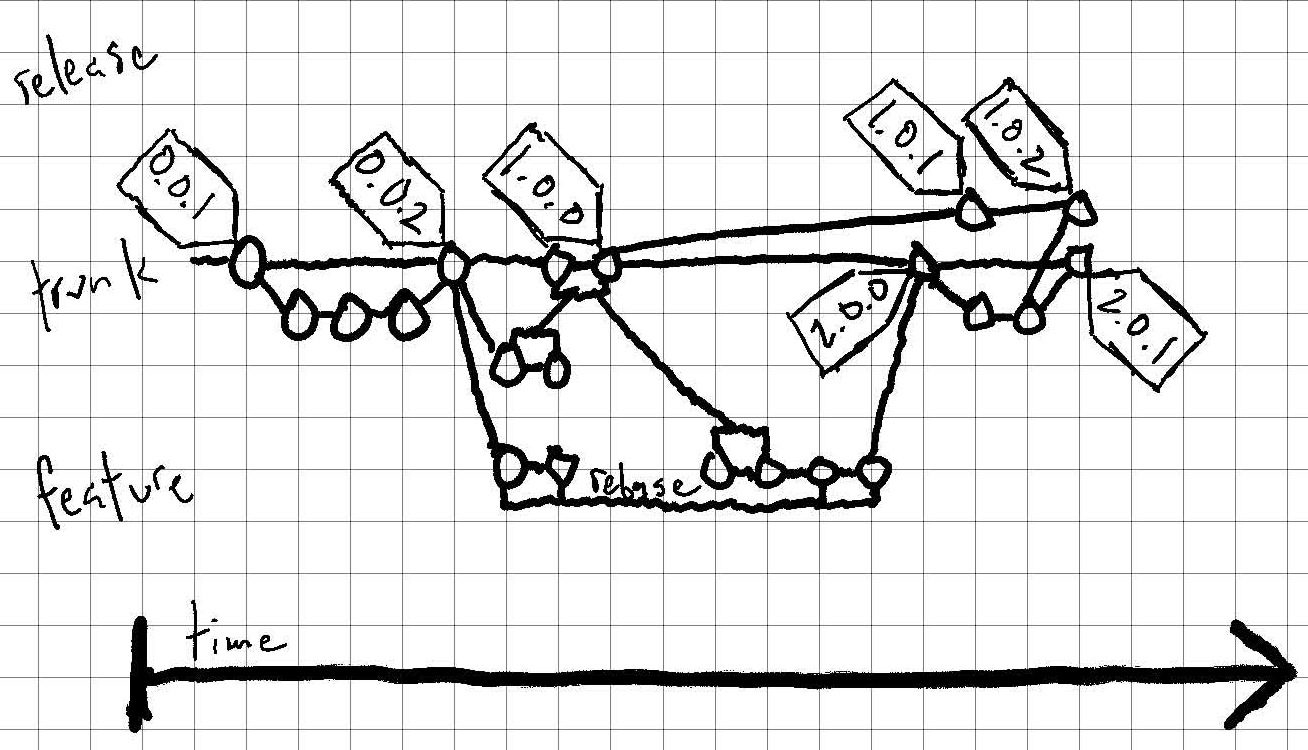 It is understandable in its historical context, since it clearly includes a ton of baggage learned from SVN or other centralized VCSes: the way Git Flow prescribes branches and tags to be created aligns with the way they’re created in Subversion, due to the difference in branch-as-reference (git) versus branch-as-subdirectory (SVN).

What isn’t understandable is why this process continues to live long after it should’ve died.